Animation is the process of creating the illusion of movement and change by quickly displaying a series of still images that are slightly different from each other. This illusion - animated images in general - is thought to be due to the Phi phenomenon. Animators are artists who specialize in making animation.

Animation can be recorded with an analog media, animation sheets, motion picture film, videotape, and digital media such as GIF, Flash, and digital video formats. A digital camera, computer or projector and new technologies have been used to show the animation. 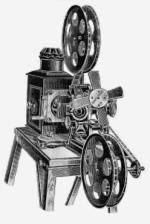 A cinematograph was a device consisting of a projector, printer, and camera that displayed moving images on a screen by the first filmmakers in history.

August and Louis Lumière was invented in 1894. The first moving image (on screen) in France was made by Charles Emily Rinad, a French science teacher.

Renad built the Praxinoscope in 1877 and the Théâtre Optique in December 1888. On October 28, 1892, he unveiled his first animation, Pauvre Pierrot, at the Grévin Museum in Paris. This film was also the first example of the use of film holes. His films were not photographed, but shot directly on transparent tape. In 1900, more than 500,000 people visited the show.

Traditional animation (also known as talisman animation or hand-drawn animation) was the process used to make most twentieth-century animated films. Each form of a traditional animated film is a drawing drawn on paper and photographed. To create the impression of movement, each painting is slightly different from the previous painting. The animators' drawings are drawn or photocopied on transparent acetate paper called talc, which is painted with the specified colors or shades on the opposite side of the lines. One by one, the characters are completed in front of a colored background using a special camera called a rostrum camera and placed on motion picture.

The traditional Talaqi animation process became obsolete in the early 21st century. Today, animation drawings and backgrounds are scanned inside the computer or drawn directly inside the computer. Various software programs are used to color drawings and simulate camera movement and effects. The final animated piece is output on one of the delivery media such as traditional 35mm film and newer digital video media. The appearance of traditional talisman animation is still preserved, and the work of character animators has hardly changed in the last 70 years. Some animation producers use the term tradigital to describe talc animation made with the help of computer technology.

The process of producing high quality traditional animation films that contain accurate drawings and believable movements and smooth animation. Fully animated films can be made in a variety of styles, from Walt Disney Studios realistic animated works (The Little Mermaid, Beauty and the Beast, Aladdin, The Lion King) to Warner Bros. Studios cartoon styles. Many Disney feature films as well as non-Disney films are examples of full-length animation, such as The Secret of NIMH (USA, 1982), The Iron Giant (USA, 1999) and Nocturna (Spain, 2007).
This process involves the use of drawings with less detail and a certain style in which the movement is usually fragmentary or non-smooth. Limited animation, founded by artists from the American studio United Productions of America, can be used as a style for specific artistic expression, such as Gerald McBoing-Boing (United States, 1951), Yellow Submarine (England, 1968), and Anime produced in Japan. However, its main application was to produce cost-effective animated content for media and television (works by Hanna-Barbera Studios, Filmation and other television studios) and later the Internet (web animations).